WeVideo Stands with the Black Community

WeVideo envisions every learner expressing ideas with creativity, voice, and empathy to forge deeper learning and impact their world.

We are here to help as we all work to face and address personal, interpersonal, institutional, and systemic racism. Please comment here with what’s top of mind for you right now and ways you’re helping students, families, and colleagues navigate important conversations 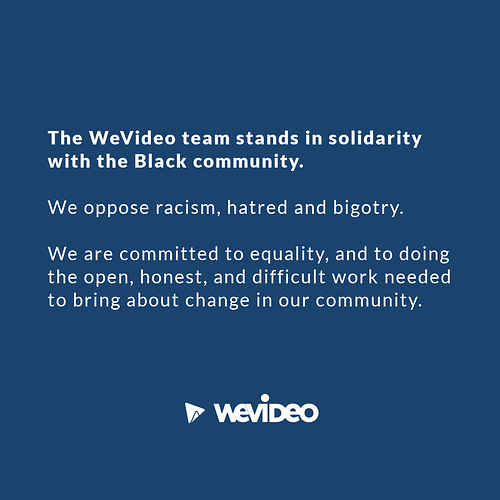 Everyone needs to pull together in these dark times and see what unites us and that we need to treat everyone as a human being.

There are teachers and community members who are stating that they feel broken. That they are exhausted from having to tell their own children or students that another person was lost, killed, betrayed. How can we shoulder this exhaustion and grief? What can we say in classrooms right now? Students want to be active and are asking “how?” and what about the parents who are polarizing and downright mean?

Those are great questions @whitney This Panel with Common Sense Education has some good insights:

These resources have helped me face my white privilege, fragility, and understand white solidarity/ how it operates in a racist culture where folks are separate and unequal by race http://bit.ly/ANTIRACISMRESOURCES

Thank you. I did find a few lesson ideas on Common Sense Media and I will watch this today Thank you!

Thank you for these titles. Much appreciated

I am not allowed to post it here, but my 12 yr old daughter used WeVideo to put together a series of Black Lives Matter images and she sang the song “Heal the World” in the background. It was very moving. Thanks to WeVideo being in our Suite of tools, my daughter could express herself in a unique and personal way. Awesome.

That is so amazing @sharon.nelson there are so many ways we can help kids raise their voice for justice. This list of children’s books can be a good place to start: https://www.embracerace.org/resources/26-childrens-books-to-support-conversations-on-race-racism-resistance

Hopefully you saw the Sesame Street town hall broadcast… I watched it with my 8-yo and I never would have thought that Sesame Street would make me cry, but it sure did…

I’m starting a new job in an elementary library this fall, and I’m already bookmarking lists of anti-racism resources for young children to obtain and read with students when we are back in school. It’s a start. But I know that I need to do more.

These are such important and necessary discussions to have with our students. I really appreciate the digital resources that so many people are sharing but I can’t help but feel that these are discussions I wish we could have in person. As much as the links and videos are great ways to start the conversation, I would love to be able to engage in meaningful, personal discussions with students. I know that, as teachers, we all do the best we can, but as the world is engaged in change that will be studied by future students, I wish we could be with our current ones.

How to integrate peace education in our school curriculum is something that I have been working for the last 4 weeks.

Right on Rob! More than ever, we need to see ourselves as human being.

As an educators we have the opportunity to ensure black role models are provided within our curriculum and inequalities within our society are being spoken about with the children we work with. Going forward it is important we look at the key figures we are teaching about , the main characters in our story books , the poets artist and scientist the children are studying , and ensure we are teaching about role models within many cultures and communities.

To educators. It is really important that we are vocal about racism and acknowledge that it not acceptable and reflective about how we can truly stamp it out. Black lives matter, representation matters, diversity matters. We need to review the content that we have in our classroom and ensure that we think about the message we are sharing as teachers of children.

Thank you for the amazing resources being shared here. With two colleagues, I am starting a book club for staff to address social justice in July and Inclusion with a focus of LGBTQ in August. These resources have been helpful.

Coming from someone like me who lives both sides of the equation… As part of a priviledged few in Colombia … And as a Latino who prefers to enter the states with his European passport just because he is hassled less when entering the immigration and customs system I honestly understand where it can seem that I come from a foreigner’s POV.

Racism is a cancer and it should be dealt with as such.

I totally get the issue of me driving through southern states terrified of getting stopped by the police and having to present my Latin foreign drivers license and get harassed as has happened more than once.

I think as educators, our goal is to help students learn. Here are 3 resources to start